I have a stack of repairs piling up but I think I am on the top side of them. I have had a run of very odd faults which were the result of someone "having a go" at mending them at some point. The customer sometimes forgets to mention this until I find a red wire which goes where a blue wire should go etc. "Oh yeah my mate down the pub had a go at mending it.  He took a part away with him and was then abducted by aliens so we never got it back. Was it important?"
Star fault of the week was on a Wurlitzer Tarrock. 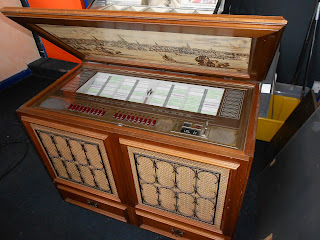 These machines are not hugely popular even though they have a mechanism almost identical to a Lyric, which is fine.  The reason for this is because many people feel a jukebox should look more like a fairground than your Granny's old blanket box.  But anyway....
The person who "had a go" at mending this was reputed to have many years experience with jukeboxes.  So you'd think that he would know what the Cancel button looks like.  What with it being a button you press, which cancels the record.  Almost like a BUTTON. So why he replaced the push button for cancelling the records with...a FUSE holder is anyone's guess.  Which is why the button was no longer a button but rather a short circuit through a fuse, which was WHY the record instantly rejected when you tried to play a record on the machine. Very creative.
Weird fault two was on a Rock-Ola 1455 which was "working fine" up until last week.  Which doesn't account for why the wiring was wrong.  Very odd. 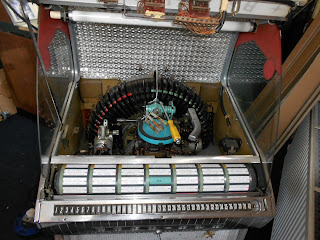 Fault number three was less baffling but unusual.
This is a Wurlitzer One More Time but made for the USA market. The lady owner imported it to the UK and used a voltage adaptor she has used many times on her International travels for making cups of tea etc.  I was a bit baffled why the machine instantly blew fuses on the amp when it was switched on until I realised that instead of 110Volt coming out of this adaptor there was actually 170V and it had fried the transformer.  Not the owners fault.  More bad luck than anything. 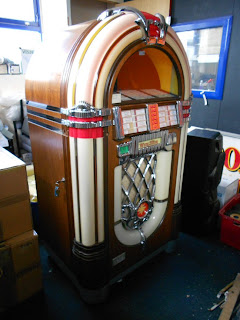 And if I ever get a few days free I will eventually get round to the Rock-Ola 403 I just bought. Busy busy busy. 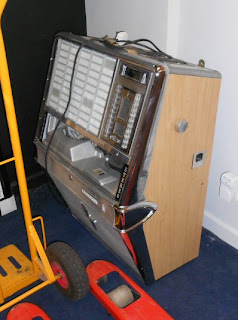