I FINALLY got the chrome back for the Lyric. They do a great job but it is really inconvenient waiting 2 months for it.  How come when you see these "Restoration" programmes they get the chrome done in a week.
Anyway I have put it all back together and it looks great.  Now I just have to get it going. 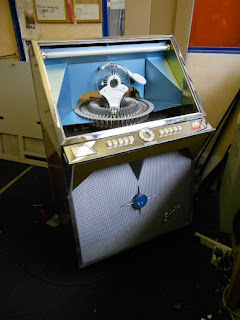 The Carillon is finally finished. I think it came out very nice after all the work. 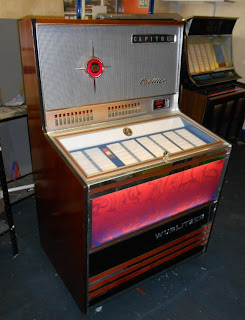 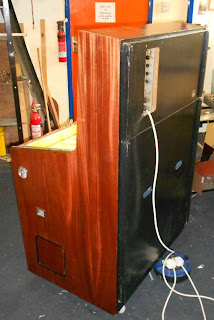 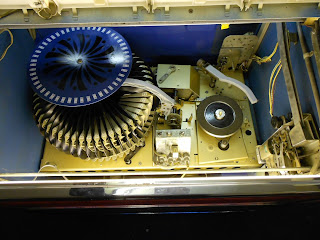 Posted by Jukebox Doctor at 5:24 AM 2 comments:

In the final stages now of finishing the Carillon. I have the amp and chrome so need to get it all assembled and going. The front looks good with the 'glass' I designed but there was a mechanical problem with the selector unit I hadn't seen before. Something must have jammed the solenoid disc which is turned by a toothed plastic wheel and it ripped the teeth off.  But I have repaired it so it should work fine. 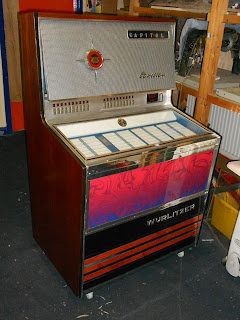 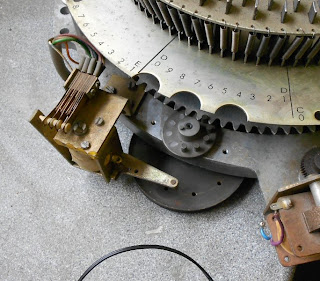 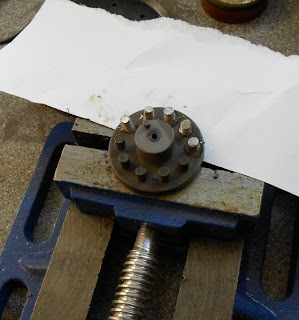 Posted by Jukebox Doctor at 5:15 AM 2 comments:

Work is progressing on the Carillon and AMI.  They are both big projects but I keep nibbling away at them between callout repairs and other faults on machines that come in for repairs. The cashbox side of the Carillion was a challenge. I couldn't get the coin reject lever off no matter how I tried. So eventually I cut the veneer with a hole in it to fit over the lever and then applied the veneer to the box with the lever still in place. Given that I used Evostick and it is a One Shot process, it certainly concentrates the mind for a few seconds!
Anyway it turned out nicely along with the front grill piece which I rebuilt with new slats across the front, veneered in the same wood as the sides.
So all I need now is the amp, so I can get the machine  up and running, and the front metal pieces so I can reassemble the front of the jukebox. 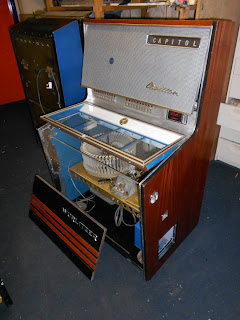 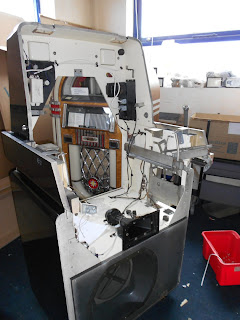 Posted by Jukebox Doctor at 1:38 AM 2 comments:

The Carillon has now two sides with new wood veneer. The third side with the cashbox and reject button is slightly more tricky but it will look great when it is done.  A new front glass has been designed and is on order but can't be assembled until the chrome parts come back. 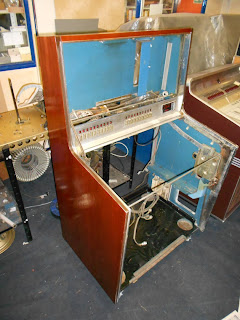 The Ami J chassis took a bit of head scratching trying to get a nice finish. No matter what I did it came out mottled, until I swapped paint brands and it came up with a brilliant high gloss finish.
Now I can put some of the wiring and metalwork back and make a bit of room. 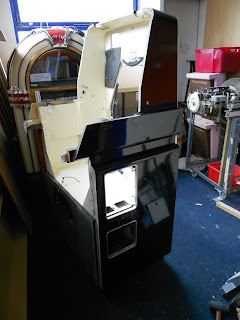 Posted by Jukebox Doctor at 10:17 AM No comments:

So after a great deal of grinding, undercoating, spraying and muttering under my breath I finally got the mechanism back together. The problem with taking this thing apart is making sure everything is in the right position so, one day, it will all work again. The gripper arm is a science all its own. 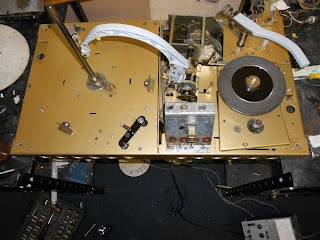 Next, dismantle and service the selector drum. Nice and easy. I've done dozens of these and this one is all complete and not in bad shape. 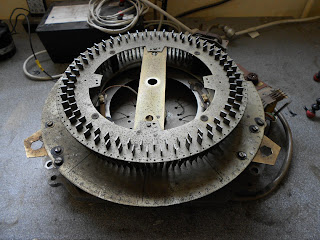 Posted by Jukebox Doctor at 11:05 AM No comments:

The mech is out of the Carillon, so it is now to work, dismantling right down to its component parts, cleaning everything up and putting it back together again. 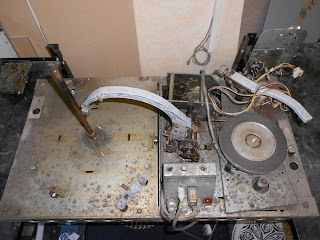 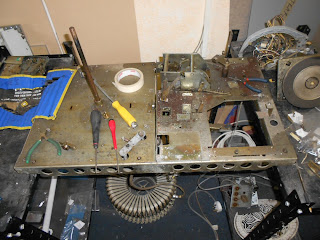 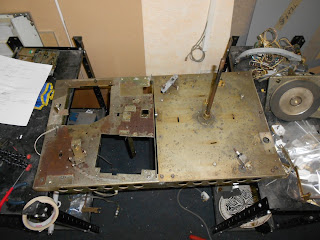 Posted by Jukebox Doctor at 2:03 AM No comments: 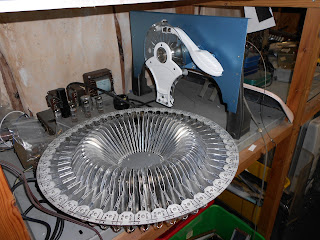 The next big lump of work is on a Wurlitzer Carillon which requires a complete stripdown to the base plate, veneer, and....everything.  It is going to be.....hem...a challenge!  But ultimately very satisfying if I don't encounter some horrors on the way.  Well...more than the obvious ones that is. 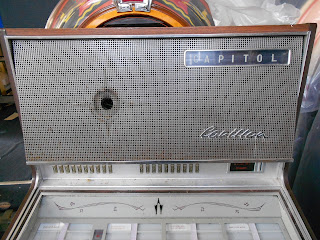 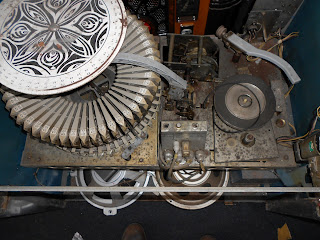 Posted by Jukebox Doctor at 3:43 AM No comments:


﻿ ﻿
I have several jukeboxes completely in bits awaiting chrome. It is interesting taking them apart, because you usually find some archeology, mainly in the form of American coins but the Lyric E was rattling with Irish coins and what looks like Greek coins, so that tells you a little of its history. It is in from Ireland for restoration (makes sense). And maybe someone went on holiday to Greece and found the coins were the same size as a 5p (one shilling).
The chrome on the AMI is a monster project. There is a huge part of the front end which needs to be polished or chromed so when it comes back and gets reassembled it will be extremely satisfying. One of my favourite processes in restoring jukeboxes is putting all the shiny chrome parts back on.
At the moment, however, my world is a mass of parts, drawings, and sticky-notes reminding me what I need to buy, order, or do next.

I just helped a guy mend his jukebox at the North Pole.  Well. O.K. it wasn't The North Pole, but rather a town called North Pole in Alaska!  Yes..ALASKA!  :)
He was hung out to dry by the people he bought it off and got no help from them at all so when he asked for help it was an intriguing challenge.
The machine is a Wurlitzer Classic 2000, which is the new CD version of a W2000.  Actually that isn't technically true. Jukebox nerds will be interested to know that the top chrome piece of a Classic 2000 is actually a copy of the chrome from a 2100 (which is why when they were first launched it was called a Classic 2100.  So now you know.)
Anyway it was doing strange things, so he sent me a video of what it was doing and I came to the conclusion it was something to do with the cam that raises the clamp arm.  When he looked inside and sent me a photo of the gearbox I could see that one of them was seriously mangled.
All credit to him, he then managed to get the gear unit out of the jukebox, which is a job even I haven't done after 10 years of working with One More Time jukeboxes.  I think when you are living in the middle of Alaska you have to be somewhat resourceful or you get eaten by bears or something.  Anyway he did a brilliant job and sent me the complete gear unit with mangled cam.

As it turned out, rather than taking it all apart and changing the plastic cam, I had an exact unit taken from a scrapped hideaway unit so I sent that to him.

After a few days of head scratching and studying his photos he managed to get it all back together and now it is working!  Great job! 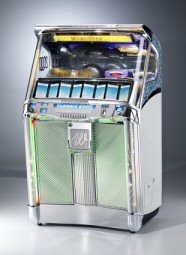 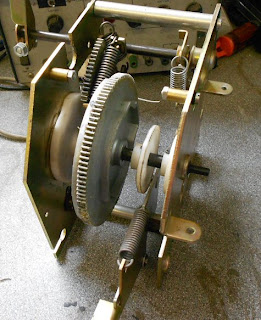 Why does everyone wait until a week before Christmas to have their jukebox fixed?  Anyway, apart from the usual chaos I managed to finish the W2500 which came out very well. That whole assembly of the rails on the front is a bit of a nightmare, getting it all back together but the end result was very pleasing. 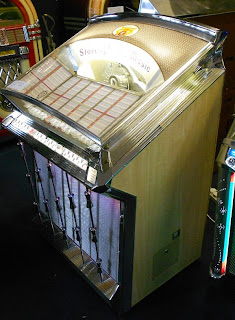 I also have a few smaller jukeboxes that I am doing for myself plus customers machines in for repair.  But the recent highlight is to find, at the house of a recent callout for a totally different mcahine...a BLUE Wurlitzer One More Time.  This is probably the rarest of any production model made my Wurlitzer in recent times.  It was made specially for the Chris Rea "Blue Jukebox" tour.  Numbers vary, depending on who is buying or selling but I am pretty confident that when it was first made, it was announced by Wurlitzer that there were only six of them.  It was good to see one close up because I just thought it was like a red or black one, but blue instead. However, it is quite a bit different.  The arch and pillasters are not the usual colour and the logo in the middle is actually blue instead of red.  So it is rather unique. 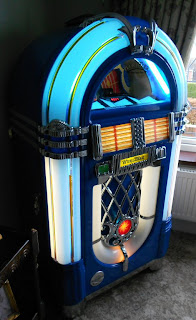 Posted by Jukebox Doctor at 11:42 AM No comments: